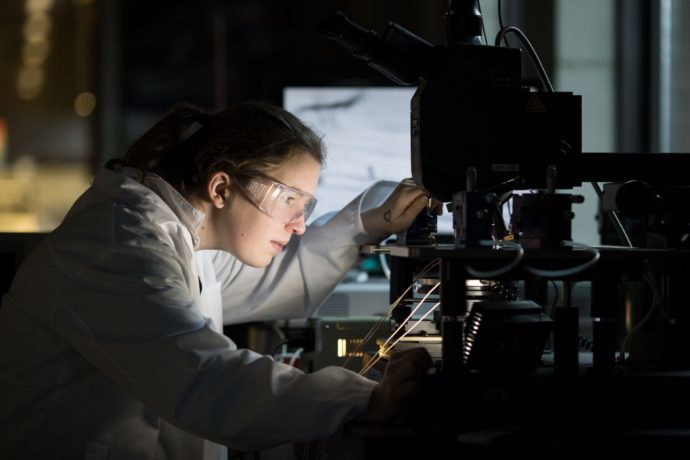 Sarah Guerin, lead author of paper published in Nature, performing characterisation[/caption]MOSAIC Group researchers have successfully modelled, grown and measured piezoelectric properties in the biomolecule glycine. Piezoelectricity is the generation of an electric charge in a material when stressed or deformed. Everyday examples of devices which utilize piezoelectric materials include mobile phone speakers, motion detectors in cars and video game controllers. However, many piezoelectric materials are normally synthetic and often contain toxic elements such as lead or lithium, making them unsuitable for biological applications. Glycine is a biomaterial and the simplest amino acid. Glycine can be used for a range of biotechnological applications. It occurs in practically all agro and forestry residues. Therefore, it can be produced at less than one per cent of the cost of currently used piezoelectric materials. MOSAIC researchers have determined that glycine can produce enough electricity to power electrical devices in an economically viable and environmentally stable way. The findings were published in a research paper on December 4th, 2017 in the leading international journal Nature Materials.
Lead author on the paper and MOSAIC Group researcher, Sarah Guerin stated, “It is really exciting that such a tiny molecule can generate so much electricity.”
“We used computer models to predict the electrical response of a wide range of crystals, and the glycine number was off the charts. We then grew long, narrow crystals of glycine in alcohol and we produced electricity just by tapping them.”
Sarah’s PhD supervisor, Dr Damien Thompson, of the Department of Physics in UL, adds, “The predictive models we are developing can save years of trial-and-error lab work. The modelling data tells us what kinds of crystals to grow and where best to cut and press those crystals to generate electricity.”
Co-author and Science Foundation Ireland (SFI) Centre for Medical Devices (CURAM) investigator Professor Tofail Syed said: “We also have a patent pending that translates our findings to applications such as biodegradable power generation, devices detecting diseases inside of the body and physiologically controlled drug pumps”.
Previously, Bernal scientists discovered piezoelectricity in the globular protein lysozyme, found in tears, egg-white and saliva, and hydroxyapatite, a component of bone. “The current finding extends the technology towards pragmatic, low-cost, renewable sources for electricity generation,” according to Professor Luuk van der Wielen, Director of the Bernal Institute and Bernal Professor of Biosystems Engineering and Design. “The finding translates the earlier Bernal scientists’ world-leading contribution in bio-piezoelectricity towards a large-scale and affordable application potential.”
Professor Edmond Magner, Dean of Science and Engineering at UL, said: “UL’s Department of Physics and Bernal Institute researchers continue to pioneer the use of biological crystals for electrical applications. This work places them at the forefront in the development of bio-piezoelectric devices”.
The full paper, Control of Piezoelectricity in Amino Acids by Supramolecular Packing, by Sarah Guerin, Aimee Stapleton, Drahomir Chovan, Rabah Mouras, Matthew Gleeson, Cian McKeown, Mohamed R Noor, Christophe Silien, Fernando M F Rhen, Andrei L Kholkin, Ning Liu, Tewfik Soulimane, Syed A M Tofail, and Damien Thompson, is published in Nature Materials, December 4, 2017.